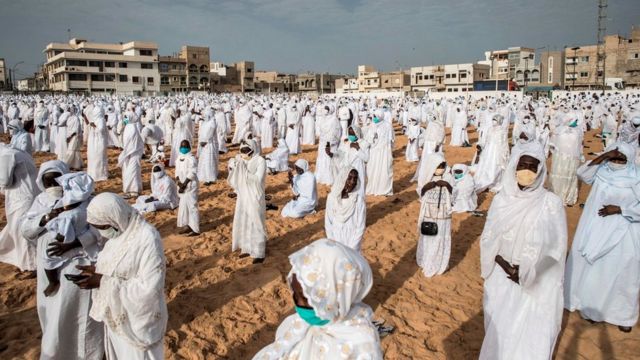 The Vice- Chancellor, University of Jos , Professor Seddi Sebastian  Maimako has applauded  both teaching and  non-teaching  Staff of the University for their commitment in conducting the abridged 2016/2017 Academic Session, First Semester Examinations.

The Vice- Chancellor was speaking when the Muslim community in the University of Jos paid him the traditional Sallah homage during the Eld-el-Kabir celebration and said the collective sacrifice of all Staff during the period was a clear demonstration of their love for the University and interest in its growth and development.

Professor Maimako thanked the Muslim community for their prayers and sacrifices in ensuring that the University enjoys the needed peace for academic activities to thrive and urged members of the University community to unite and work together for the overall good of the system.

Professor Maimako used the occasion to point out some challenges facing the University caused by activities of some members of neighbouring community including cattle grazing on campus, illegal packing of trucks and lorries around the Naraguta Campus gate and the dumping of refuse around the campus.

The Vice- Chancellor approved that the leadership of the Muslim community in the University should engage elders of the surrounding communities towards tackling these challenges.

The Vice- Chancellor said he was mindful of all the observations and issues raised by the Muslim community and assured them that Management would work towards addressing them where possible and wished all Staff a hitch-free Sallah celebration.

Speaking earlier, Chairman of the Muslim Community, University of Jos, Alhaji Ibrahim Othman said it is customary for the Unijos Muslim community to pay homage to the Vice- Chancellor and commended him for the good job he is doing in managing the affairs of the University.

Alhaji Othman urged the University Management to remain focused on issues that would ensure the sustenance of peace, unity, growth and progress within in the University.

The Chairman expressed concern over the continuous felling of trees on campus especially around the Faculty of Natural Sciences, which he said was not good for the environment and was also worried that the surroundings of some offices and lecture halls had overgrown grasses in addition to the problem of water shortage which he said was a challenge at the Naraguta Campus. He requested that provision be made for small prayer points at the various Hostels   which would allow Muslim Students to observe their prayers.

Highlight of the visit was the symbolic presentation of gifts to the Vice-Chancellor by the Muslim community to commemorate the Sallah celebration.